Fulton Market: How Times Have Changed

Before Fulton Market became the restaurant and corporate office mecca it is today, it was home to meatpackers and food distributors. Though many of the historic buildings in the district were built between 1880 and 1929, its roots go all the way back to 1850, when a municipal market hall was constructed in the middle of Randolph Street as a food market.

Chicago, through the Civil War and up to the 1920s, was known as the headquarters of the meatpacking industry. Chicago’s “big three” meat packers – Armour, Swift, and Morris – had headquarters at the Union Stockyards but individual branches in Fulton Market. 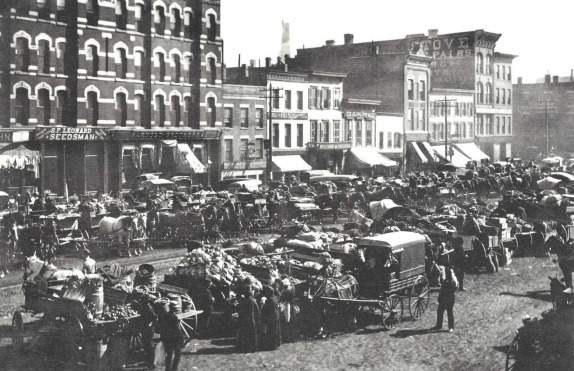 Although the market doesn’t look like that anymore, the hustle-and-bustle of the food industry still existed for years. In the 90s, one might walk down Randolph Street and be inundated with refrigerated trucks, pallet jacks, the noise of loading docks and meatpackers in white coats. Deliveries started at 2am, sometimes earlier. And at night, it was a little more gritty: the area was no stranger to prostitutes and guys walking around with shopping carts, hoping to collect (and later sell) wooden pallets.

While some food distributors still exist in the area, they are few and far between. When well-known Chicago restaurant Girl and the Goat opened in 2010, it spurred neighborhood growth that few could have predicted. Two years after that, the CTA opened a Green/Pink Line stop at Morgan and Lake, paving the way for office commute. Google announced its headquarters in the area in 2013, and it seems like every day there’s a new tech hub or restaurant popping up.

And even though the restaurants moving in was what started pushing the food distribution industry out, a lot of chefs lament the fact that you can’t shop Fulton Market the way you used to. For many in the food and hospitality industry, Fulton Market was a space where you could pick up anything you might need, last minute or otherwise. In a recent Chicago Tribune article, Chef John Mannion of La Sirena Clandestina said, “There are a lot less pallet cars and a lot more drunk young people.”

It remains to be seen what – if any – remnants of the former meatpacking and foodservice industry will stick around that area. As new business moves in, it will be interesting to see the challenges that arise.

Do you remember Fulton Market in the 90s? How have you seen Chicago change?